This is the sixth part in a series looking at Arsenal in the 1930s.  The whole series has been written, and is now being updated step by step, incorporating information found along the way.

Arsenal had ended up October top of the league two points ahead of Aston Villa and Sheffield Wednesday after 12 games.  Not only was this cause for great pleasure among the visitors to Highbury, but so was the manner of the way the game was being played.  Arsenal had scored 34 goals in 12 games.  Entertainment as well as victory was nigh on guaranteed.

But they entered November with a certain trepidation, knowing that in two consecutive games they would have to play those two teams in second and third.   But first Arsenal had to go to Huddersfield.

Huddersfield were seventh when they welcomed Arsenal to Herbert Chapman’s old stomping ground and their results going into the match on 1 November were not too exciting.  In their previous four games they had lost away to Villa 6-1, drawn at home 1-1 with Chelsea, beaten Leicester also at home 4-1 and lost away to Sunderland 4-2.

Coming into the match Huddersfield might have preferred to play at Highbury, where Arsenal’s results were won 3, drawn 2, compared with an away form which showed greater success for the counter attacking style.  But Huddersfield got a draw 1-1, and double their normal crowd, so they were undoubtedly quite happy.  (Indeed even in 1923/4 when Huddersfield won the league their attendances only average 17,395, so finance was always a problem.)

In terms of the Arsenal team Keyser was dropped after playing the opening 12 games of the season, and seemingly doing rather well.   But there were serious suspicions about his regular desire to fly back to the Netherlands, as well as questions about whether in doing this he was involved in any smuggling.  Indeed his subsequent life raises questions in these areas.   Bill Harper returned to Arsenal and took over in goal.

Arsenal had broken the goal keeping transfer record to bring Harper to the club, but then after finding himself not automatic first choice he left and went to play in the American Soccer League and made 79 league appearances for Fall River Marksmen (and later the Boston Soccer Club and upon their dissolution the New Bedford Whalers).

And maybe the idea had always been for Keyser to be a stop gap until Harper returned – such reports as there are, are contradictory.

After a return for just one match in October, David Jack came back into the line up, this time for good (and he scored the Arsenal goals) which meant Brain dropped out.

Which also meant that Arsenal had now used 16 players in 13 games.  The players who had played in all these games were Tom Parker and Eddie Hapgood as the full backs, Roberts and John in the middle and Jack Lambert and Cliff Bastin in attack.  Thus the team had a consistency and solidity in each department.

So next it was Aston Villa, sitting in second came to Highbury.  In their last game they had just beaten Blackburn Rovers 5-2 at home, but their away form (two wins, two draws, two defeats), suggested that not only were they not using Arsenal’s technique of playing the same counter attacking style home and away, but there might be a chance for Arsenal’s Highbury-loving team who had six wins and a draw at home, with 26 goals scored in those seven games.

In fact Arsenal ran riot in front of Highbury’s biggest crowd of the season thus far.  Jack got two more to add to last week’s goal, Bastin got two and Lambert the fifth.  The Daily Sketch reporter (L V Manning) commented, “I never hope to see a better match”.

As a result of this game Aston Villa slipped down the league to fourth, and Sheffield Wednesday, Arsenal’s next opponents, rose up to second.   As it turned out this was the first of nine games during the season where Arsenal score five or more.

For Villa it was part of a dip, as in their next game at home they lost 4-6 and for the last game of the month drew 2-2 with Blackpool.  And the response of the media?  Slowly the phrase “Lucky Arsenal” was taking hold both in print, and then following that lead, on the terraces.  It was a preposterous claim indeed, but the media propagated it over and over, and it stuck.

Arsenal then packed their bags and flew to Paris where on 11 November 1930 the score was Racing Club de Paris 2 Arsenal 7.  This was the first in the series of games to honour and raise money for those who gave their lives in the first world war, each game played on or close to Armistice Day and such was the success it turned into  a regular event, taking place as close to Armistice Day as possible each year.  It was in fact one of two regular friendlies that the club instituted – the other being a game against Rangers, which started in 1933 as the Game of Champions.   Indeed there was a link between the two contests as at the 1933 match against Rangers Arsenal invited Racing to be guests of honour.  In return Herbert Chapman and Samuel Hill Wood (the chairmen) were given the French Medal of Physical Culture.  Allison later received the same medal as the series continued. 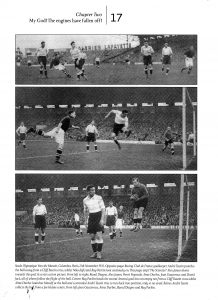 The above illustration comes from the magnificent book “Too dearly loved to be forgotten”.   Full details of this remarkable book which tells the full story of Arsenal against Racing, and details of how to obtain it are included in the Untold-Arsenal review here.

The idea may have emerged after Chapman and others heard about the Coupe des Nations which was held in 1930 – and played between the champions of ten countries.  I am not sure if there were other cross border friendlies of this type – but if there were, they were few and far between.

Our French opponents still exist, but are now nowhere near so famous as they were, and have been renamed several times, now being called Racing Club de France football Colombes 92.  They are an amateur team, but play in a 15,000 capacity stadium – Stade Olympique Yves-du-Manoir- somewhat reminiscent of Queens Park in Glasgow.

Racing was founded in 1882 and were a founding member of  the French first division, and in 1936 won the title (having won the earlier version of the league 30 years before) as well as the Coupe de France five times.  David Ginola is one of the players discovered by the club.

For this match in November 1930 Jack Lambert scored four as Arsenal won 7-2.   There are stories of the French press giving Arsenal players nicknames such as Le Feu d’Artifice (The Firework) for Cliff Bastin, and La Miracle for Alex James.  Parkin, Jack, Lambert (4) and James got the goals, Parkin and Hulme replacing Seddon and Williams.

After the excitement of air travel to France (the first time the players would ever have been in a plane) there was an away trip to Sheffield Wednesday, and another victory (2-1) and another way above average crowd (43,671).  The publicity machine that Chapman had built was doing its job as much as his team way.

Harper, having replaced Keyser, missed the match and Preedy came in, although I am sure this was either a case of illness or injury for Harper returned for a series of games after missing just this one.  Otherwise the team continued as before, with Lambert continuing his scoring spree with both goals.  So that was a goal against Villa, four in Paris and now two against Wednesday – and yet it is reported that after scoring just one goal in four before this run, he was convinced he was going to lose his place.

Next up was mid-table Middlesbrough at home, and with the two challengers at the top of the table firmly dealt with Arsenal won 5-3.  The team remained the same except that Harper now came back into goal.  It was the second league game of the month in which Arsenal scored five: Lambert got three and Bastin two.

The month ended with an away game at another mid-table team – Chelsea, and this time the whole team remained the same.  And this being November, it was another five – the third of the month in the league and the fourth of the month all told, as Arsenal won 1-5 in front of an astonishing crowd of 74,667.  Jack got a hattrick, Lambert and Williams one each.

Arsenal had now scored 52 goals in the league in 17 games, and 23 of them had been scored by Lambert.  May I just emphasise that: he had scored 23 goals in 17 games.  I was an extraordinary achievement for a man who two seasons before had managed just six league games and one goal all season.

The league table looked like this at the end of the month.   Sheffield Wednesday (who had won five and lost one of their last six) and Portsmouth (five wins and one draw in six) were now the main challengers.  At the foot of the table Man U were showing something of a revival having won one, drawn two and lost just three of the last six.