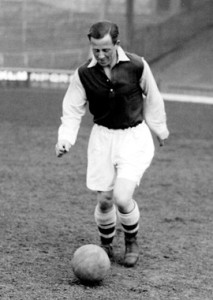 George Cox was born in Warnham near Horsham in Sussex on 23 August 1911, and signed for Arsenal as an amateur in November 1933 from Horsham, before turning professional the following month on 19 December.

Horsham FC were formed originally in 1871, and then reformed in 1882 on a firmer footing, and thus taking the latter date as their firm foundation, they are four years older than Arsenal.

Horsham helped form the West Sussex league, and won it on several occasions.  The club still exists and plays in the Isthmian League.   As with Arsenal their golden age was in the 1930s when they won the county league six times.

George Cox made his Arsenal debut on 8 March 1934 against Leicester and went on to play seven league games in this and the next season.

However it is fair to say that some of George’s chance was to some degree affected by George Allison’s attempt to enhance the club’s chances of winning the FA Cup in 1936 (a successful attempt as it turned out) by putting out less than the full strength team on occasion.  Ultimately Arsenal were fined for the tactic, but it proved successful in a footballing sense.

On February 29 1936 Arsenal beat Barnsley 4-1 at Highbury in the 6th round of the FA Cup.  With other clubs playing League matches that day Arsenal now had games in hand, but clearly had little chance of winning the League.  However being in the semi-final Arsenal had every chance of winning the cup.

In fact the league table after the FA Cup quarter finals meant Arsenal had four games in hand over the leaders (Sunderland) but were a massive 15 points behind, in the days of just two points for a win.

Thus from this point on, new names started to appear in the Arsenal team for league games – players who had not few, on in some cases, not a single appearance before, during the season.  Players like  Cartwright (left half and right half), Kirchen (outside right), George Cox (centre forward), Tuckett (centre half), Westcott (centre forward) and Bernard Joy, (centre half).   Additionally Dougall, who had made one earlier appearance got a run of games at inside left.

These players notched up 30 games between them during the remainder of the season – but (not surprisingly) not one of them played either in the semi-final of the Cup on 21 March against Grimsby, nor in the final on 25 April against ~Sheffield United.

On 4 March 1936 Arsenal beat Derby County away 4-0 which given Derby’s position in the league was a fair vindication of the team selection by George Allison, especially as new men Dougall, Kirchen and Cox all scored.  But then Arsenal only won one game in the League from the next ten, and that is what made the League see red (as it were).

So 8 June 1936 at a Football League hearing Arsenal were fined £250 for not putting out their strongest team.  But by then George had already been transferred to Fulham on 5 May 1936 for £150.  He remained there for one season before seeing out his footballing days playing for Luton Town.

Although he only scored one goal for Arsenal he could be a prolific scorer, as his Football Combination record of 53 goals in 75 matches shows.

However despite playing for Arsenal’s first team during the glorious 1930s, George Cox remains better known for his career in first-class cricket and he was indeed himself the sun of a cricketer who played for Sussex (in cricket he was known as George Cox Junior).

He started in cricket with Sussex in 1931 aged 20, and played 455 matches, scoring 22,949 runs (making an average of 32.92), hitting 50 centuries and recording a highest ever score of 234 not out.   He later played for Winchester College and was cricket coach there before moving on to be a coach at Sussex.  Reports suggest he was a “witty conversationalist and letter writer.”