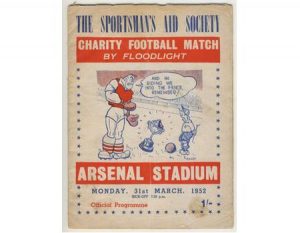 used in order to test out Highbury’s new floodlights.  We don’t have any details of this year’s game but we do have a picture of the programme from the following year.  For the 1952 edition Denis Compton refereed, Gordon Richards and Tommy Farr ran the lines. The Boxers included Cockell, Gardner, Williams and Woodcock while the jockeys had Lester Pigott as one of their reserves.

Here are the anniversaries…

2 April 1887: Archibald Devine was born in Lochore, Fife.  He won the FA Cup with Bradford and played a game for Scotland before playing in the last season in Plumstead and first at Highbury, after which he went back to Bradford.

2 April 1887: The date of the cup final defined the end to Arsenal’s first ever season during which the name Royal Arsenal FC was established, and the club was opened up to all employees of the ordnance factories on the south bank of the Thames.

2 April 1894: George Jaques, one of the 28 players who represented Woolwich Arsenal in their first ever League campaign, played his last match for the club: a home friendly against Nottingham Forest which Arsenal lost 1-3.  He did not register for any other club, he just seems to have packed up and gone, and was lost to history.

2 April 1897: The Woolwich Herald reported that Thomas Mitchell the highly successful former Blackburn manager had arrived at Plumstead to take up his job as manager.

2 April 1910: Bristol City 0 Arsenal 1.  It was the 7th game in a row in which neither side scored more than one goal.  The run ended on the last day of the season after 11 consecutive matches.  See also here

2 April 1911: Fred Calvert signed for Woolwich Arsenal as an amateur. He played just two games for the club after which we lose all sight of him.

2 April 1915: Manchester United beat Liverpool 2-0 in a match that was blatantly fixed. Liverpool had already previously been cited twice for match fixing in recent seasons but although both teams were found guilty neither club received any punishment – which had a major impact on the first post-war season

2 April 1915: Hull 1 Arsenal 0.  Last game for George Grant.  Born in Plumstead he came from Invicta in Dartford and moved on to Millwall.  This was the last of a run of games which started on February 27 in which The Arsenal won one, and lost five, scoring one goal and conceding six.

2 April 1920: Arsenal had no fewer than seven league games scheduled for April 1920, but still took on two additional friendly games including against Bolton on this day as well as having three games on the next four days!  14,700 turned up and Arsenal used the match to give a game to Williamson (who had been first choice keeper but had now lost his place to Dunn).

2 April 1921: Most football history books record Stockport County v Sheffield Wednesday as having the lowest crowd in league history.  But as so often with football, the story has been mashed up over time. It actually all started on this day.

2 April 1921: Amidst growing industrial confrontation, and threats of a coal strike which would disrupt the railways, and make life very difficult for the London clubs to get to away games,  Arsenal drew 1-1 away to Sheffield United with Rutherford scoring Arsenal’s goal in front of 35,000.

2 April 1926: Last Arsenal game (in the reserves) for Clem Voysey.  He was one of the most controversial figures in Arsenal’s history but quite what happened is forever shrouded in mystery.

2 April 1926: A bad defeat for Arsenal (3-0 away to Aston Villa) meant Bill Harper was dropped but he was back for another 23 league games in the following season.

2 April 1927: Arsenal 0 Huddersfield 2.  An injury to Horace Cope kept him out of the team for the rest of the season, and the cup final.  It was the third of six consecutive defeats.  It was also the last game for Billy Milne

2 April 1934: Arsenal beat Derby 4-2 as expected, to continue their push for the title, wherein they were equal on points with Huddersfield who played the following day against Liverpool.  Huddersfield had an excellent home record, Liverpool were appalling away and yet it ended second placed Huddersfield Town 0, 19th placed Liverpool 2. It was one of the great upsets of the season.

2 April 1945: Brentford 3 Arsenal 1 in the Football League South (the wartime league).  The match had started on Christmas Day but been abandoned at 1-1. 7000 attended the abandoned match but 12,700 turned up in April, although Arsenal were in a poor run of form losing four league games in a row.

2 April 1951: A trial match using the new floodlights at Highbury was played: The Boxers v The Jockeys.  It was a regular event that raised money for charity.

2 April 1977:  Graham Rix’ first game – a 3-0 victory over Leicester in which Rix scored one of the goals.  As unlikely as it seems O’Leary got the other two! After seven consecutive defeats followed by a draw with Stoke this was the start of a run of winning six out of seven.

2 April 1989: Tony Adams scored to put Arsenal ahead, but then put into his own net in a 1-1 away draw with Man U.  It was a run of seven without defeat which took Arsenal so close to Liverpool in the league table the season was ultimately decided in its final seconds.

2 April 2005: Arsenal 4 Norwich 1. Gilberto Silva returned after his long layoff with the back injury which it was feared might end his career.   He went on to play over 80 more league games for the club.

2 April 2011:  Almunia’s last match – a 0-0 home draw with Blackburn Rovers. On 30 September he signed a loan deal with West Ham, and did not play for Arsenal again.  His contract ended on 30 June 2012. He later played for Watford for two years but then as he prepared to move to Cagliari a serious heart condition was revealed and he immediately retired from playing.