Peter Duerden, a Blackpool FC supporter and historian, recently got in touch asking about the Arsenal team for a match against Blackpool in 1899 – I’ve naturally done what I can to help.  In return Peter has very kindly taken the trouble to provide local newspaper reports from Blackpool for the games, and I am delighted to be able to publish them here.

Of course the players’ names won’t mean too much, but the style of reporting is fascinating.

The Arsenal History Society has chosen, as you probably know, to focus on individual periods of Arsenal’s history – the 1970s, the 1930s, and the Norris era (1910-1927) but if anyone fancies going through the Woolwich press for the early years of Royal Arsenal and Woolwich Arsenal and supply copies as per those below, I’d love to publish them.  I regret I don’t have time to do the search and retrieval myself.

So here are the reports, and then below that, the league tables after the second game.   The regular anniversary file will appear in a separate report later today. 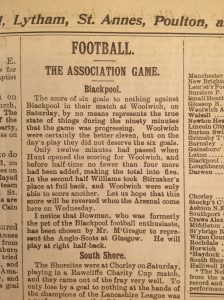 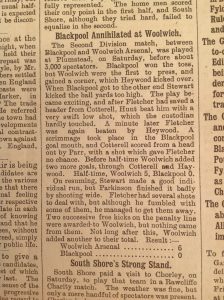 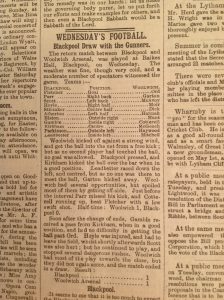 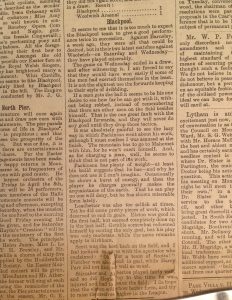 The Blackpool away game was one of only two games in the 1898/99 for which no crowd figure was recorded.  Arsenal’s home crowds are shown as varying between 2,000 and 7,000 during the season.

Arsenal finished the season in 7th, which was pretty much their regular position until things started to pick up in the new century, culminating in the club’s first promotion in 1904.  Blackpool finished the league in 16th.

“Woolwich Arsenal, the club that changed football” is the definitive history of Arsenal from its inception as a league club through to its first year at Highbury, and reveals dramatic elements of Arsenal’s early days that have never been revealed before.

“Making the Arsenal” is a journalist’s inside view of the events around Arsenal’s collapse in 1910 and the rescue that paved the way for the move to Highbury and the arrival of Herbert Chapman.

Both books are now available on Kindle and in print.    Please see here for more details.

Highlights from this website (see here for full indexes)

Today’s Arsenal Anniversaries: For the latest story please see the top story in “Recent Posts” on the left of this page.

Henry Norris at the Arsenal:  There is a full index to the series here.

Arsenal in the 1930s: The most comprehensive series on the decade ever

Arsenal in the 1970s: Every match and every intrigue reviewed in detail.