Arsenal put their pursuit of Premier League points to one side this month when returning to Europa League action. The Gunners are in Round of 32 action on 18 February in Portugal where they’ll face off against Primeira Liga runners up Benfica. The return happens a week later in London.

Followers of the beautiful game planning to place a soccer bet online will find Arsenal as hot favourites. Mikel Arteta’s side are also one of the traders’ picks to win the UEFA tournament outright and secure a return to Champions League football next season.

If we have learned anything from this tournament it’s that nothing can be taken for granted. Arsenal have met Benfica only twice before in competitive action and the result digs up painful memories for those loyal to the English side.

The first match on record involving Benfica and Arsenal was in the European Cup back in 1991. There was little between the teams on that occasion with the Londoners proving more than a match for their hosts. Despite pundits in Portugal expecting a strong home win, the battling Gunners certainly didn’t disgrace themselves.

It was the Portuguese that made home advantage count, however, striking first to take the lead inside the first 15 minutes of the game. Isaias broke the deadlock early on and some camped in the away stands who had made the trip perhaps felt the floodgates would open soon after.

Those fears were unfounded. Arsenal immediately got themselves back on level terms. In the first few minutes after scoring a goal some teams can be fragile, still celebrating their lead while the opponents are working hard to get back into the match. That’s exactly what happened as Kevin Campbell lashed home an equaliser with 18 minutes on the clock.

Arsenal received the praise they deserved from the British media, but they knew they’d have to do it all over again when Benfica came to London for the all-important second leg. 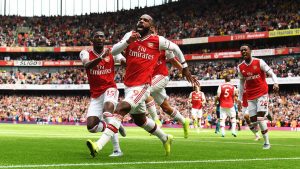 “Arsenal F.C celebrating” by Arsenal is licensed under CC BY 3.0

With the tie hanging in the balance, locked at 1-1 on aggregate, followers of the Gunners would have been forgiven for thinking their side had the narrow advantage. They had claimed a draw away from home and scored a goal. The match was now back on their patch and they had something to protect. Win the game and they would progress to the next round. Keep a clean sheet and they’d be through.

European football rarely follows a simple path, especially for Arsenal fans, and that night at Highbury the battle took more than a few twists and turns. A scrap that went right down to the wire but it was Benfica who progressed to the next round, keeping alive their hopes of winning the European Cup. Their opponents were left to pick over the bones of what could and probably should have been that night.

Interestingly, Arsenal took the lead on that cold night at the old Highbury with Pates netting on 19 minutes. The English side were now in a commanding lead, 2-1 on aggregate with the home support behind them. Remember what we touched on earlier? Things rarely go to plan in European football. That remains true for Arsenal to this day. 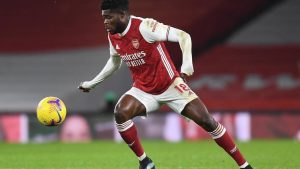 “Arsenal team set up” by Arsenal is licensed under CC BY 3.0

Benfica got themselves level on 35 minutes when Isaias scored and 1-1 was the result at full-time. The game then went into extra-time where Benfica prevailed.

Kulkov scored a stunning goal on 100 minutes to shock their hosts and as Arsenal frantically tried to get back into the contest they conceded again.

Isaias was the standout player of the round, netting his second on 109 minutes to finish off the challenge of Arsenal. The tie was over, and Benfica progressed with an aggregate score of 4-2 after extra-time.

Will history repeat itself or can Arsenal banish the memories of that defeat to Benfica? The teams meet in the knockout stages of the Europa League with the first leg played in Lisbon. They move to London for the second leg, the Emirates replacing Highbury.