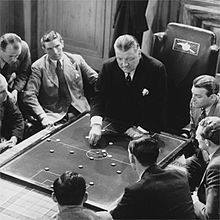 … one of the days when Arsenal have never played a competitive match, and in fact have only ever played twice.  In 1928 against IFK Gothenburg in a friendly which Arsenal won 3-1 and again in 1937 when we beat Copenhagen 4-1.  Both were played away as part of tours.  As a result we don’t have a video from today, but hopefully will shortly be putting up another video collection….

Aside from the daily videos on days where there was an Arsenal game of note that we can commemorate we are also building the video collections, where we focus on matches against just one club

Details of the video collections where we gather together the videos relating to Arsenal games against one specific opponent are on the home page while the list of the 270+ videos we have gathered commemorating events on individual days are to be found via this link.

Today’s Arsenal anniversaries are published below.

The Arsenal History Society is part of the Arsenal Independent Supporters Association – a body which gives positive support to the club, and has regular meetings with directors and senior officials of the club to represent the views of its members to the club.  You can read more about AISA on its website.

For all other issues please contact Arsenal History Society at Tony@schools.co.uk

28 May 1900: Frank Lloyd transferred to Aston Villa, after just one season with Arsenal in which he played 18 league games and scored three goals.  His transfer date is also quoted as 26 May in some quarters.

28 May 1914: Frank Bradshaw signed from Everton.  He played in the final pre-war season and then in the four seasons immediately after the war totalling 132 league games with 14 goals.

28 May 1934: George Allison became the manager of Arsenal.  Upon the sudden death of Herbert Chapman, Allison had acted as middleman between the board and temporary manager Jo Shaw in  the previous season.  Shaw now (seemingly happily) returned to his duties with the reserves at the end of his triumphal season, and Allison took on the role, ending his reign after the first post-war season having won the league twice and the FA Cup.

28 May 1937: Reg Lewis made first senior appearance in a friendly v Copenhagen and scored twice as Arsenal won 4-1.  His scoring knack continued through his time at Arsenal and he ended his career with 103 league goals in 154 games.

28 May 1956: Johnny Petts signed as a professional.  Although he stayed at the club for five years he only made 32 appearances before moving on to Reading.

28 May 1977: Wimbledon, champions of the Southern League, were elected to the Fourth Division at the expense of Workington.  They went on to beat Liverpool in the cup final in 1988 and stopped Liverpool winning the double.

28 May 1999: Oleg Luzhny joined Arsenal for £1.8m from Dynamo Kyiv. He had been the captain of the side that got to the semi-finals of the 1999 Champions League, beating Real Madrid and Barcelona en route.

28 May 2013: Kyle Ebecilio moved to FC Twente on a free transfer.  He had come to Arsenal from Feyenoord and never played for the Arsenal first team but played for the Netherlands at every level from under 16 to under 21.