During the final week of September, Arsenal’s first team played one league game and a charity match whilst the reserves also played a league game. There was also an interesting appointment to the Football League Management Committee.

Woolwich Arsenal played host to Newcastle United this week. Newcastle had started the season well and were only one point off the leading clubs.

The Reds made four changes to the previous game: Crawford, Shaw and Thomson returned after missing one game whilst Flanagan had missed two. Randall and Winship were injured, and it was rumoured that Sands was carrying an injury which was why he was rested for the game against Clapton Orient.

George Jobey would go on to join Arsenal during the summer of 1913 and would score Arsenal’s first goal at Highbury.

A good crowd of 17,000 turned up – the largest gate since Boxing Day. If the locals continued to turn up in such numbers throughout the season it would result in a 20% increase in income and may keep the club in Plumstead.

Having won the toss, Newcastle elected to defend the Abbey Wood end (this was at the eastern end of the Manor Ground) which gave them the advantage of a strong wind behind them. The away team used this to great advantage and pressed Arsenal during the opening stages of the game. However, Shaw, Sands and McKinnon were in fine form and kept the Newcastle attack at bay. From a clearance by Shaw, McLaughlan tried to get Greenaway away but he kicked it too far ahead of him. Then Arsenal took control of the play with Burrell, Common (twice) and Greenaway all being denied byLawrence.

Arsenal were then awarded a penalty after McCracken had handled in the area. Common, who had scored a penalty in the corresponding fixture the previous season, hit a rising shot but it was too close to Lawrence who pushed it over the bar. Following this, after 41 minutes,Newcastleput together a string of passes in Arsenal’s half and Stewart converted McDonald’s cross to put the visitors ahead. They kept the lead and the teams swapped ends with the score Woolwich Arsenal 0 Newcastle United 1.

Arsenal started the brighter of teams in the second half, aided by the prevailing wind. The game was played mostly in midfield with both defences being very effective. McLaughlan was put clear a couple of times but was eventually denied by Whitson and McCracken. Newcastle started to use the offside trap to great effect which displeased the home crowd. On 75 minutes Burrell took a free-kick which Common headed towards goal,Lawrencecould only push the ball against the post and McLaughlan followed it in for the equaliser. The crowd then got behind the home team but their hopes were dashed when Common shot over, which he had become adept at doing this season. Both sides then went looking for the winning goal withNewcastle’s Peart coming the closest, Crawford pulling off a fine save to deny him. This was the last action of the game which finished Woolwich Arsenal 1 Newcastle United 1.

A fairly tame cartoon this week. Brutality will be resumed next week. 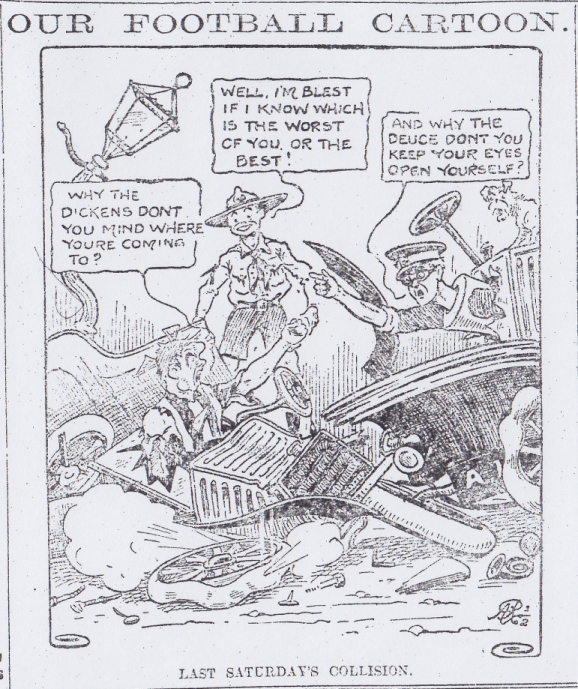 The Division One table looked like this after the game:

The reserves travelled down to the south coast to play Brighton & Hove Albion in the South Eastern League.

A much shuffled line-up saw a local player called Bennett coming in to play his only game for Arsenal. I’ve not managed to find out anything else about him.

A very one-sided first half resulted in Arsenal leading 3-0 after 45 minutes, the goals being scored by Hanks (his sixth in four games), Spittle and Payne.

The second half started in much the same fashion butBrightonthen scored a debatable “was it over the line?” goal. Oh, for the want of video replays! Payne restored the three goal lead before Brighton reduced their deficit in the closing stages of the game.

The win put Arsenal’s reserves at the top of the South Eastern League table, above Chelsea on goal average.

On Monday the first team played against Chelsea atStamfordBridge.

This game was a one-off charity match under the guise of the London Professional Footballers’ Association Charity Fund. The professional Londonclubs would play one game each year and the gate receipts, after deduction of ground and advertising expenses, were distributed to various institutions throughoutLondon. It ran from 1908 to 1913.

The clubs were bound by the rules to field their best eleven players and the winners received gold medals.

There was a dramatic incident as the Arsenal players travelled to Stamford Bridge in the afternoon. Rather than try to re-word it, I’ve reproduced the report of the incident below. 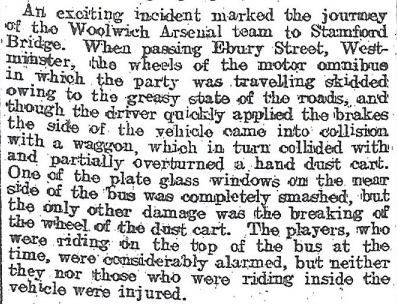 9,000 turned up which resulted in £127 being added to the charitable fund.

Arsenal made two changes to the team that drew with Newcastle, King and Lewis replacing Sands and Burrell respectively.

The game was fairly even for the first 30 minutes with Common and Flanagan both heading over. After 35 minutes Arsenal attacked, McLaughlan putting the ball out wide to Greenaway who put in a cross for Flanagan to score. A few minutes later McLaughlan put Arsenal further ahead with a drive following another cross from Greenaway. There were no more goals in the first half.

At the start of the second half, Arsenal had two great chances. McLaughlan had a great shot well saved and then Lewis hit the post. Against the run of play, Chelsea created an opening but contrived to miss an open goal with Crawford nowhere to be seen, which was fast becoming his modus operandi. McLaughlan put the game beyond reach with another splendid shot. The Reds then eased off and, following a number of good saves from Crawford, Steer gained a consolation goal for Chelsea from a corner.

So, following a shaky start to the season, points were being gained in the league and the players had medals that they could show off. The directors would have been pleased with the gate receipts from the Newcastle game. Things were looking good.

Other news for the week included:

During the week, 20 year old inside-right James Robertson was signed from Ashfield, a club based in Glasgow. He stood 5ft 9in and weighed 11st 8lb. He had played for Ashfield for four years, winning the Glasgow Junior Cup on three occasions.

The local papers continued to report on Andy Ducat’s progress following his broken leg. It appeared that complications had arisen. A split in the bone resulted in a reconstruction of the leg being needed which would keep him out of action for much longer than was originally anticipated.