We at the AHS have always championed John Wilkinson Humble because he was associated with the club from the start of the 2nd season as a player in 1887  until leaving in a Norris inspired cloud in 1927. 40 years at a club as player, committeeman, director and supporter is very impressive. However, one role he did not excel at was the role of home side Royal Arsenal umpire, which was distinctly short lived.

In those days there was a referee who was assisted by umpires. The referee was usually neutral but both teams provided one umpire to effectively act as a conduit between the players and the referee and “it is only through the umpire that appeals of the players can reach the referee”

When Royal Arsenal moved to the Invicta in 1890 they tried a rolling system of six different men. One of these men was Jack Humble and he alone of the umpires came in for adverse comment.

He is first mentioned as the Red umpire against 93rd Highlanders on 11 Oct 1890 in the South Eastern Herald when he is mildly rebuked with the words “time after time did the players appeal against the offside play of the Scots, and the fouls, but Mr Humble either seemed too modest or else too interested in the game to appeal for them.”

However, his second and from what we can see final appearance as a Red umpire was away at Clapton on 15 November 1890 and what has to be the first time in any report a team’s umpire is given as the main reason the team lost, so central was he and his poor decisions to the Arsenal defeat of 1-2.

Firstly, he was blamed for not overturning the referee when he accepted, the referees offside decision, of what the reporter Invicta claims was clearly an onside goal scored by Howat. This is explained thus “The Reds should have had an umpire who could put the matter before the referee, so that he couldn’t possibly have given an adverse decision. In the absence of such an umpire, goal number one was lost”.

Worse was to follow as Barbour scored a backheeled goal, of which the referee accepted and was about to write down in his book, when he was stopped in his tracks by the Red Umpire who exclaimed “no goal”. Despite the neutral referee believing it was a legitimate goal Humble, the Arsenal umpire, persuaded him to disallow an Arsenal goal. 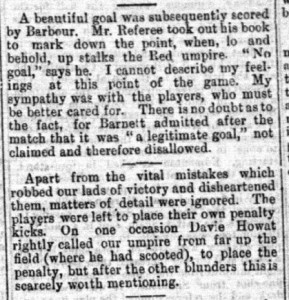 The reporter continues during that week and next to excoriate Humble, referring to the Clapton game as the “Humble match” and indeed so bad were his performances that his bizarre judgements were questioned in a specific question about his umpiring 10 weeks later at the half Year AGM of 1891 .

The next week he was replaced by Alf Singleton, by most accounts a far superior umpire.

However, Singleton was part of the Weaver clique aiming to take over control of the Royal Arsenal football club which was in full swing by this time. He eventually ended up setting up the ROFFC in direct competition to Royal Arsenal FC but which folded soon after and he moved back to his home town of Preston.

Clint Eastwood once said a man should know his limitations, Singleton obviously did not, but by 1891 Humble did, as he concentrated from then on to become a leading  adminstrator for the club and the third longest serving board member in Arsenal history.

The story of Weaver’s Clique will continue in our next Book on Royal Arsenal 1886 -1893, as we find more and more details of this episode and it appears it began earlier than we originally believed. For those who haven’t already purchased it Woolwich Arsenal: The club that changed football has a whole chapter on the events that led to the club being renamed Woolwich Arsenal, which was in many ways a necessity due to Weaver and his cronies assault.

3 Replies to “Too Humble an Umpire?”