This week 100 years ago, Woolwich Arsenal took on West Bromwich Albion in the Midlands.

Following the debacle of the previous week, manager George Morrell changed the defence for the first team this season. Jack Peart was seen as the scapegoat for the shockingly poor display at the back and was dropped to the reserves. Joe Shaw was moved to left back, Percy Sands moved back to the right back berth and King replaced Sands in midfield. Up front there were the obligatory changes with Common coming back into the team for Spittle and Winship replacing Burrell.

The game got off to a flying start. Arsenal kicked-off and Greenaway made a good run down the right wing, putting a cross that Pearson kicked away. The ball fell to Winship on the opposing wing and his cross was met by Flanagan whose shot was pushed around the post by Pearson for a corner. West Brom cleared the corner and went straight on the attack. Shearman took the ball upfield and put in a cross which Sands failed to head clear. The ball fell to Morris who converted. Fortunately for the Reds Morris was deemed offside. The home team continued to press with Crawford saving from Waterhouse and Shaw heading away a dangerous cross from Jephcott. Crawford was kept busy by further attempts from Buck and Morris which he kept out. Following a breakaway from Arsenal, West Brom resumed the attack and Shaw fouled Morris just outside the penalty area. Buck’s terrific low drive was equalled by Crawford who was having the game of his life. Another breakaway by Arsenal saw Hanks force a save from Pearson but the home team continued to have the best of the play. Arsenal struggled to get out of their own half, and when they did they struggled to get men forward. Greenaway was the most dangerous, as he had been all season, but his crosses were easily cleared by the untroubled defence. Arsenal were temporarily reduced to ten men when McKinnon split his tongue in a collision with Bowser; the cut being so bad that it had to be stitched. West Brom took advantage of this and, after 39 minutes, Morris put them ahead, beating Crawford to a though ball from Buck. This invigorated the home team and Crawford was forced to save from Jephcott and Waterhouse in quick succession. Morris then crashed a shot against the bar. It wasn’t looking good for the Reds. But then they finally received some good luck when Wright had to leave the field. Arsenal worked the ball forward from a throw-in and a rising shot from Greenaway put them on level terms on the stroke of half-time. West Bromwich Albion 1 Woolwich Arsenal 1.

Both teams patched up their wounded and resumed the game with a full complement of players. West Brom started the second-half in aggressive style although Jephcott and Waterhouse were both guilty of dawdling on the ball. Arsenal cleared a corner and broke away, forcing a corner of their own. The ball was put into the box but Common slipped as he shot and the ball was cleared. Yet another corner was won, this time by the home team. Shearman’s kick was met by Morris who made no mistake with his header and West Brom were back in the lead. As with their first goal, this one seemed to give them more confidence with Wright and Bowser going close soon after. Shaw picked up an injury which delayed the game for some time, with no substitutes back then he had to soldier on. West Brom continued to press and Crawford earned his money keeping out shots from Wright and Morris whilst Jephcott shot over. Arsenal finally got away and Hanks was fouled by Waterhouse about 20 yards out. Common’s low hard shot was denied only by the post. The game then flowed from end to end with both teams having chances. Towards the end of the game the Reds had a good spell of possession but their final ball wasn’t decisive enough and game finished West Bromwich Albion 2 Woolwich Arsenal 1.

The general consensus was that Arsenal played much better than the previous week but it was the same old story that the forward line just couldn’t produce. Strangely, depending on which paper you read, Percy Sands either had a great game in his new position of right back or he looked hopeless! 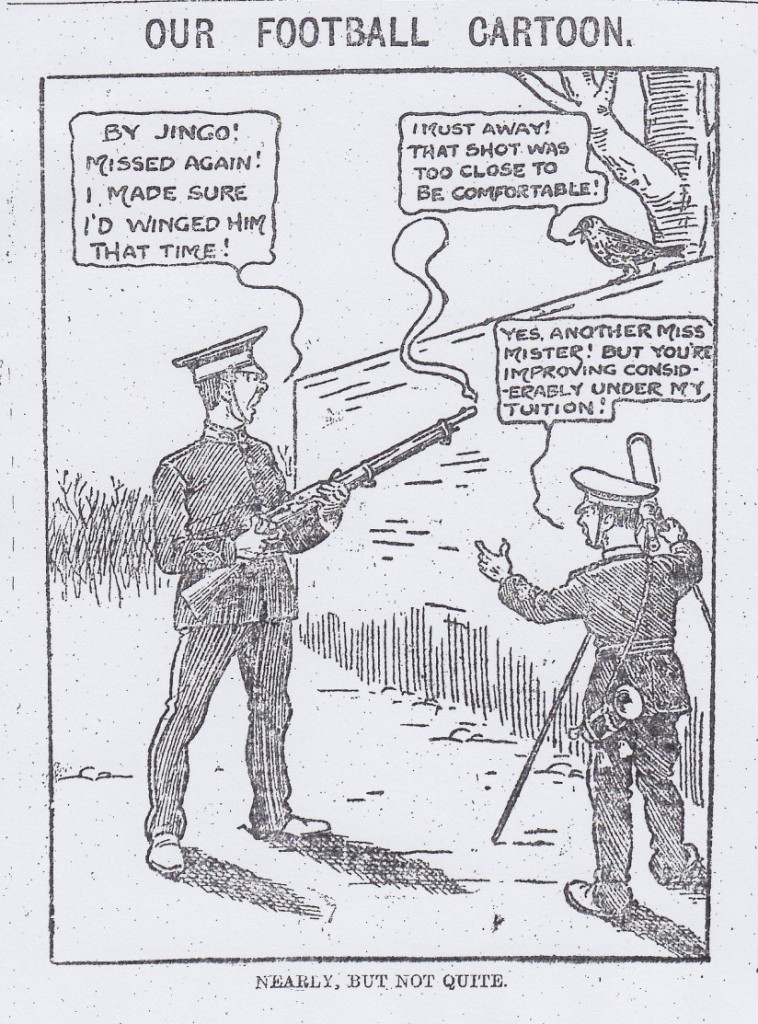 Further bad news was that Notts County registered a win and a draw during the week to take themselves off bottom place and within a point of Woolwich Arsenal. Relegation was now becoming a possibility.

The reserves played two games during the week. On Wednesday 6 November they travelled down to the South coast to play Portsmouth.

The game was used to try out a strong front line that could be used in the first team; Greenaway, Hanks, Common and Winship were all considered first team players. The team lined up like this:

The Reds got off to a great start when Winship scored early on from a Greenaway corner. That turned out to be the only goal of the game although Portsmouth had two goals disallowed for offside and Arsenal had three very good penalty appeals turned down. With the experimental forward line not showing any sort of form even in the reserves George Morrell must have been at the end of his tether trying to work out how to get the first team to score.

On Saturday the reserves played host to Peterborough City. There were seven changes to the team that had played mid-week, Robertson returning to the team following an injury.

The eleven representing the junior Reds was:

As was expected, Arsenal dominated the game but, as was not expected, Peterborough opened the scoring in the first-half against the run of play. Calder equalised almost immediately from the kick-off and Lewis put Arsenal 2-1 up shortly after half-time. Graham should have put the Reds 3-1 up shortly after this but his penalty was saved by Tirrell, the Citizens’ goalkeeper. Just before the game ended Peterborough equalised, again against the run of play, when Wilson fumbled a soft shot and the ball trickled over the line. By all accounts, Arsenal should have scored at least six goals. It looked as if the reserves had started to mimic the first team.

These three points left the reserves in second place two points behind Chelsea, but with two games in hand.

Not much more in the way of football news this week but Woolwich Arsenal chairman, Henry Norris, was elected mayor of Fulham for the fourth time.

28th October 1912 – Another defeat, but still above Tottenham