In the spring of 1935 Arsenal had done what only one team had ever done before them – won the league three times in a row.   More than that they had done this under three successive managers: Herbert Chapman, Joe Shaw, and George Allison.

The last game of the season on 4 May 1935 against Derby itself led to another achievement as Arsenal equalled the club’s all-time goal difference record of 69 set in 1904.  A draw and they would have beaten it.

This was followed by a single friendly match, against Norwich, which I’ve described in the article on April and May 1935.

On the transfer front on 9 May 1935 Reg Lewis joined from the nursery club Margate, but his debut was not to come until 1 January 1938.  Later in the month, on 24 May 1935 Bernard Joy joined Arsenal as an amateur from Fulham.  He started out with the reserves but played twice for the first team at the end of the 1935/6 season.  By 1937 he was a regular, but still an amateur – a status he maintained throughout his time at Arsenal.

He went on to write a book on Arsenal – Forward Arsenal! which he published in 1952.  It contained a fair amount about Arsenal’s history, and it was for many years taken as a definitive volume on the story.  However it subsequently became clear that the level of research Mr Joy had undertaken was very limited, and the factual account of the Woolwich Arsenal days was eventually replaced by “Woolwich Arsenal: the club that changed football” – a book in which I had a modest part in creating.

Next on the eternal roundabout of transfers, on 25 May 1935 Dennis Compton signed professional forms with Arsenal, having joined as an amateur in 1932.  He made his debut in September 1936.  His brother Leslie, had already started playing for Arsenal and his progress has been noted in our Arsenal in the 30s series thus far.

On 31 May the populace at large were reminded that with the speed limit of 30mph firmly established in built up areas, there was another change to the motoring law, as the driving test became compulsory for everyone who had not held a licence before.  Those who had been driving before and had obtained a licence were exempt – which meant that throughout the rest of the century there were still drivers on the country’s roads who were legally driving having never passed the test.

With the players taking their summer rest, some would undoubtedly have taken time out to watch Alfred Hitchcock’s new movie The 39 Steps, a film that is still shown as a classic on TV today.

On the political front with the economy still in desperate straits, Ramsay MacDonald retired and Stanley Baldwin took over as Prime Minister.  11 days later Britain signed the Anglo German Naval Agreement agreeing to a German navy equal to 35% of the UK’s tonnage.

Meanwhile the transferring wasn’t over as on 15 June 1935 Arsenal signed John (Jackie) Milne for a fee reputed to have been £5000.  He played 49 league games and scored 19 goals.

We know that John had played just 45 times for Blackburn and so it looks like in signing him Allison was taking a bit of a punt as he tried to refresh the Arsenal team.

With no news of Arsenal in July 1935, I imagine the players didn’t return to the club until the second or even third week of August.   Away from football however the news was rarely good and on 12 July there was rioting in Belfast following the annual Orange parades, with 13 dead, hundreds injured and around 2000 Catholic houses destroyed.

At the end of the month there were two publishing events that had a significance in history.  On 29 July TE Lawrence’s Seven Pillars of Wisdom was published (it had previously only been available on limited circulation) and the following day Penguin Books were launched – the first mass market paperback publisher in the UK

And that was the bulk of the summer.  As was normal at the time there were no pre-season friendlies although we have evidence that there was an Arsenal v Arsenal Reserves game played which was open to the public, on the weekend before the start of the season on 24 August in the form of a photo of the action. 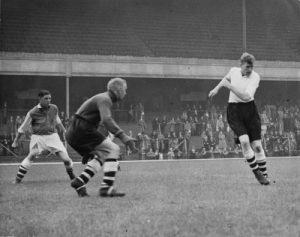 This picture is from the pre-season game with the West Stand behind.  The West Stand had seating in the upper tier and standing below, until the 1960s.

There was also an early season friendly game – the Game of Champions created by Chapman, but this was not played until 25 September.  We’ll come to that later.

The first game of the season that we have an official record of was 31 August 1935 and as luck would have it, is was between last season’s league winners – Arsenal, and the runner’s up Sunderland.

This included the first appearance of John Milne and Arsenal duly won it 3-1.  The team was

Eddie Hapgood received an injury which caused him to miss the next three games, but otherwise the new season got off to a decent start and the established goal scorers did the job: Drake got two and Bastin the third.  66,428 turned up – Arsenal’s biggest ever crowd for the opening day of the season.

Elsewhere on that day the results in the first division included an away win for Sheffield Wednesday 1-2 at Villa, and a 1-0 win for Manchester City at home to West Brom, meaning that three of the top four of last season won.

Tottenham, now back in the second division after their end of season collapse a few months before, won 1-0 away at Bradford City.

Of course in those days no one published league tables after just one game, but had they chosen to do so, the top ten of such a table would have looked like this

The story continues as we resume the normal month by month account of Arsenal’s progress through the 30s.  There is a list of articles in the Arsenal in the 30s series on our index page for that series.

Here’s the index for “Arsenal in the Summer”