Arsenal began February 1937 in second place, one point behind Charlton and with one game in hand – plus three points above Brentford in third.

Charlton were the team in form with five wins and a draw in the last six.  Amazingly no other team had won more than half of their last six games (Arsenal had three wins and three draws – the best “last six” record after Charlton.   It was a factor that allowed for the extraordinary events to come in the rest of the season.

This table below shows the home and away divide – Arsenal by this time had the best away form in the league, and were emulating the Chapman approach in each of his title winning seasons both at Arsenal and Huddersfield.  A counter attacking style that was as effective at Highbury as it was on the road.

The alternative approach of the fortress at home and snatching some away victories was much more common.  As a result four teams were still unbeaten at home but of the clubs in the top ten at this point, three had either no or only one away win after 13 away games.

Thanks to Steve Ingless, the author of “Too dearly loved to be forgotten” we have a picture of the squad around this time.   You can find full details of Steve’s book, which I cannot recommend highly enough in the review which appears in Untold Arsenal.  That review also includes details of how to get the book. 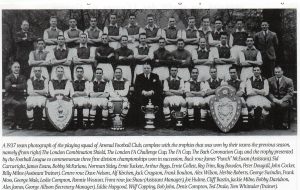 The first match of the month pitched us away against Derby – who as we can see from the table above were lying sixth, but who had been beaten four times at home.

However the most important point was that Arsenal were unbeaten since the home defeat to Manchester City on 5th December having then won six and drawn three of the subsequent nine games.  Indeed in those nine games Arsenal had scored three twice, four twice and five twice.

Derby however were not in such good form having drawn with bottom of the table Manchester United, beaten Sheffield Wednesday and then lost 5-2 away to Preston.

Arsenal made no changes from the team that had seen off Wolverhampton in the league and Man U in the cup at the end of January but the game turned out to be a helter-skelter of a match with Arsenal going behind from the start and being 2-3 down at half time.   Anxious to continue their winning run the attacking formation continued in the second half, as did the goals, but ultimately Arsenal lost by the unlikely score of 5-4. Drake, Bastin (penalty) Kirchen and an own goal were simply not enough.

With none of the other top teams playing, Arsenal’s game in hand had been used up and the league positions remained the same.

However next up was Manchester United at home.  Having beaten them 2-0 away in the league and 5-0 at home in the cup this did not seem to be too big a hurdle.  Man U were still bottom of the league and had won just one and lost the other 12 of their away games this season.  But Arsenal have never taken the easy route and actually managed to go a goal down, before Davidson finally got a goal back to give Arsenal a draw.

The game saw a return for Alex James, whose appearances in recent times had become more and more sporadic.   Having made just 17 starts last season, this was his 14th league game in 1936/7, and he was not to be seen again in a league match until the end of March.

Most attention however was focused on Brentford who beat Derby (the mid-week slayers of Arsenal) by 6-2.    One time challengers, and last season’s champions Sunderland went down 3-0 to Everton, and indeed the only other victory among the top clubs was Charlton’s 2-1 win at WBA.

But this was a topsy-turvy season indeed, for the following Wednesday Brentford lost 4-0 to Wolverhampton, giving Arsenal some hope that if Charlton (who they were due to played in a couple of weeks) could falter once or twice, the championship might once more be coming to Highbury.

On 12 February 1937 Laurie Scott signed for Arsenal.  Ernest Tuckett went to Bradford City in part exchange.  He went on to play 115 games for Arsenal before moving on to Crystal Palace in 1951.

But of course most thoughts were on the games to come and if the championship was on people’s minds these thoughts were the thoughts of some then the 0-0 draw with Sheffield Wednesday put them on hold once again.   After seven league games out Hapgood returned at left back, but exactly as happened in December at this very moment Male was out with an injury, and so once again Leslie Compton swapped sides and played right back.  Roberts, Drake and James were also all missing, and Bernard Joy was given another chance to redeem himself at centre half.   Bastin moved up from right half to inside right (to cover for the reduced firepower with no Drake available).

Sheffield Wednesday had continued their poor season and were only one point above the relegation places, and for them the point was certainly a bonus.  But for Arsenal, after the great run that had taken them to the top of the league, this was now three games without a win.

However there was some half-good news as Charlton could only draw 1-1 with Man City, as Brentford made up some of the slack by beating Man U 3-1.

Now, for Arsenal at least, there was a pause from the rigours of the league, as the fifth round of the FA Cup come along, with Arsenal playing Burnley at Turf Moor.   Burnley had been beaten by Tottenham on the 13th – their third defeat in a row in the second division, with the club letting in three goals in each of these games.  A decent run around the holiday period had taken them up to 8th, but these defeats meant they had slipped back to 11th.

Allison chose the moment to put out Arsenal’s strongest XI:

With the exception of the keeper and Kirchen (who had become a fixture in the side since the second week of October) this was the team that opened the season for Arsenal and Burnley must have wondered from the off what they had done in a previous life to deserve this.  Arsenal were 4-1 up at half time and ended the day winning 7-1.  Drake got four, Crayston, Bastin  and Kirchen the others.

What really fascinated me about the match was the attendance of 54,445.  Was that possible in Turf Moor?   Apparently the answer is yes, because it turns out that the record attendance at Turf Moor was set in 1924 when 54,755 people, again for an FA Cup match – this between Burnley and Huddersfield Town crammed into the ground.   So, I guess 54,445 is right, although I can’t believe that this was either safe, or something that afforded a fair number of those inside much view of the game.  Burnley’s average crowd for league games was 12,041.

The FA Cup out of the way, the league game that was scheduled for that day (Arsenal v Charlton) took place on Wednesday 24th in the afternoon.  Not yet a title decider, but pretty much seen as a pointer to who might win the league in a couple of months time.

It was tense from the off, and goalless at half time, with each side knowing that a win for Arsenal would have them back on top of the league – which explains the 60,568 crowd – quite extraordinary for a Wednesday 2.15pm kick off.  A draw or Arsenal defeat would leave Charlton in pole position.

Of the other top clubs Sunderland and Manchester City won – Man City by a rather surprising 0-5 away to Derby, leaving them undefeated in nine.

There was one match left for the month – an away visit to Grismby who were languishing in 14th but with a decent home record of nine wins, three draws and two defeats.  Arsenal no longer held the best away form in the league (Charlton had just sneaked ahead) but even so Arsenal were expected to win.

Allison made four changes from the Charlton game.  Out went Roberts, Drake, Bastin and Davidson.  In came Bob John, Milne, Dennis Compton and Bernard Joy.  And the changes paid off.  Kirchen got a hat trick in the 3-0 win.

Here are the month’s results

The abbreviations, as always…

Two points behind but still with a lot of games to play.  Anything was possible – and as the coming reports will show, that certainly turned out to be true.

Arsenal in the 30s

For details of other series please see the home page.