Today, playing large numbers of matches in the Football Combination (the reserve league) would be derided, but many is the player for whom doing just this in the 1930s was a matter of significance, and the medals to be won as Arsenal regularly won the Combination league were items to be cherished.   Here is the picture of the 1934/5 team reserve team.  Quality copies of this picture are available via Amazon, if you are interested. 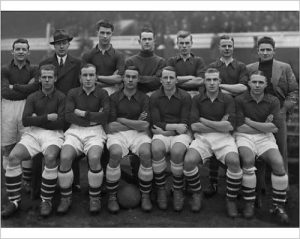 In this picture we can see Reginald Frederick Trim who was born on 1 October 1913 in Portsmouth, and became the captain of England Schoolboys at left back, signing for Arsenal in April 1933 and remaining with the club until 1937 despite making just one first team appearance during all that time.

That appearance was in the infamous 1-0 home defeat to Derby on the final day of the 1934/35 season.  The game was infamous because Arsenal had already won the league with two games to spare, and Derby were under no threat of relegation as the table with two games to go clearly shows.

So there was no excuse for Derby to do anything other than play an entertaining exhibition game, and try and catch Arsenal being less than fully focused.   With Eddie Hapgood out again, Compton was rested and Trim given his chance,

But Derby had no such thoughts of entertainment in mind and went on an outrageous physical rampage which the ref did nothing to stop.  So violent was the assault that during the game Ted Drake, Tim Rogers, Bobby Davidson, George Male and Pat Beasley were all injured.  The Arsenal management were so shocked that rather than the normal policy of keeping injured players on the pitch at all costs they allowed players to come off and receive extended treatment as a way of protesting them against the brutality.   At one time three players were off the pitch together getting treatment.

Reg Trim never made it as a first team player other than for his one game, but did make over 150 appearances in the Combination.  This picture shows him playing in the regular pre-season game of the first team against the reserves in August 1935

7 Replies to “Reg Trim: only one game for Arsenal but a varied career as a footballer”