This article is an extract from the Arsenal History Society complete series on Arsenal in the 1930s.  Full details of the series are given at the end of the article.

On 26 April 1930 Arsenal won their first ever F.A. Cup 2-0 v Huddersfield.  And indeed on this day they won their first ever major trophy.   It was the final remembered for the Zepplin flying overhead, and because it involved Chapman’s present and past employers playing each other.  It was also the first final in which the managers led their teams onto the pitch.

And it was also that very rare thing: a London side lifting the cup.  It had only ever happened twice before and both those times had been by Tottenham in 1901 and 1921.

The Huddersfield team contained seven internationals – Arsenal’s had six – including Alex Jackson who had achieved fame throughout the UK by being the hero of Scotland’s 1928 win against England at Wembley scoring a hat-trick in the 5-1 victory which had rocked English football to the core.  The Scottish team had also contained Alex James (whom Cliff Bastin, playing in the final at the age of 18 years and 1 month, described in his autobiography as “unintelligible”.)

Arsenal had developed the habit of going to Brighton before each cup tie to help overcome the nerves.  And indeed nerves there would have been as Arsenal had lost their one and only previous cup final, and Huddersfield were very much the top team of the moment.  But Arsenal had already beaten Huddersfield 2-0 in the league at Highbury and drawn the away game.

In his account of the match Bastin only criticised one player in the Arsenal team for cup final day – Charlie Preedy, who played in goal because Lewis was injured.  There were in the 1930s some keepers who stayed on their line, and others who came out.  Preedy was one of the latter and Bastin described his “far too daring antics” which he claimed gave most of the team heart failure.

Bastin also described in detail the goal, which he suggests was carefully arranged – not by Chapman as it turned out but by the players!  Bastin was facing at full back the England captain Roy Goodall and it was agreed that if there was a free kick inside the Huddersfield half Alex James would give a short pass to Bastin who would draw the defence waiting for James to be free in the box.   It worked and James scored his first, and only, FA Cup goal of the season.

The second goal was a classic in the Chapman style.  James put the inch perfect counter attack pass through from his own half to Lambert who by-passed the members of the defence who had not been drawn upfield and scored.

Arsenal had their first trophy and aas for Bastin, he had a cup winner’s medal less than a year after leaving Exeter City.

Here was the Cup Final team…

The only players who survived from the previous Cup Final against Cardiff in 1927 were Tom Parker, Bob John and Joe Hulme.

Here is one of the goals…

And here is the Zepplin

And the cup winners… the lights you can see hang over the dog track that went around Wembley at the time. 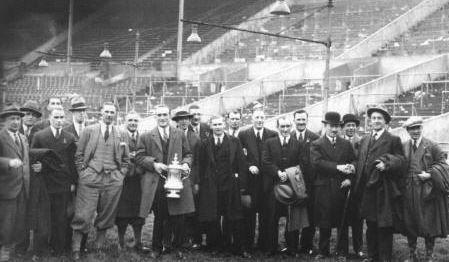 And the winning team posed

After that league life went on.  On 28 April 1930 having won the FA Cup just two days before, Arsenal then proceeded to lose 0-1 at home to Sunderland.  Also see here

On 3 May Arsenal showed off the trophy in their final match but lost 2-4 at home to Villa, completing the run of only one league win in the last nine games of the season.  But still, they had won a trophy, they had won one match earlier in the season 8-1, and aside from the final two games after the final (which were excusable) they were quite often looking a really good team.

Arsenal played only one post-season match that year on 5 May 1930: Northampton Town 0 Arsenal 7.  It was one of a series of end of season games with Chapman’s first managerial club, which was set up to help Northampton recover from a devastating fire that had swept their ground.   The game was agreed in the winter, and although when they made the offer Northampton knew they would get their old manager and his first division team back, they didn’t know that Arsenal would be displaying the FA Cup!

The series “Arsenal in the 30s” is the most detailed account of Arsenal’s most successful decade ever produced.  The series is complete and now additional commentaries are being added, and articles about all the players who played in the decade are being published.

The home page of this site lists many of the series that have been written over the years, but below here are the most popular.