As part of the series of articles covering Henry Norris at Arsenal we’re now looking at the players who played in the first season under Henry Norris’ chairmanship – 1910/11.  A list of all the players and their number of games, with links to the articles on those players already covered, appears here.

George Burdett is one of the players of whom we known only a little – and we don’t have a record of his date of birth or death, since he joined Arsenal as an amateur, and amateurs didn’t have to give a DOB, and could easily leave football without leaving a trace of themselves as they moved on through life.

However we have a note saying he was born in Tottenham, and that before joining Woolwich Arsenal he played with Fusiliers.

The problem with that club name is that there were a lot of Fusiliers teams at the time.  One particularly famous one was 2nd Northumberland Fusiliers Football Club which participated in the FA Amateur Cup from 1910/11 to 1912/13.

However army teams of this era were not clubs as such as players did not register for a club, but were in the battalion and so could play.  It is said that some commanders might promote men on the strength of sporting ability as it enhanced the reputation of the battalion.

We do know he joined on 31 August 1910 and was a musician with the Royal Artillery Band at Woolwich – quite possibly the only musician to have played in goal for Arsenal.  However I don’t think there was a Fusiliers battalion based at Woolwich.

His arrival with the team coincided exactly with a dramatic reversal in fortunes for the club as previously the club had only won three games in 14 league matches.  However with their new keeper in the team, Arsenal went through those remaining 11 games without defeat.

Not surprisingly he kept his place for the start of the 1911/12 season and played in all of the first 15 games.

However after successive defeats to Blackburn and Sheffield Wednesday during which he conceded six goals the keeper was dropped – or was unavailable because of military duties.  The notorious Leigh Roose (also an amateur) came into the side for two games followed by HS Crawford who also got two.

Burdett then got three more games, but after a 2-2 draw with Aston Villa he was dropped or unavailable again and Crawford, and Roose (Arsenal’s celebrity keeper particularly recruited by Norris for his eccentric behaviour and national fame) shared the position.

Thus in both the seasons in which George Burdett played he was in a side that finished 10th.  A considerable improvement on the season before he arrived (18th) and the season after (20th and relegated).

He played 28 games and kept six clean sheets.  I have a note saying that he left in 1912, and suspect that this was before the start of the terrible 1912/13 season – so presumably he did not sign on again as an amateur in the summer of 1912.

The picture below from the Dundee Courier is noted as coming from the first match of the 1911/12 season and was a 2-2 draw with Liverpool at the Manor Ground.  Arsenal are in the full coloured (ie not striped) shirts, and I suspect the man with the fist out is indeed the Arsenal keeper. 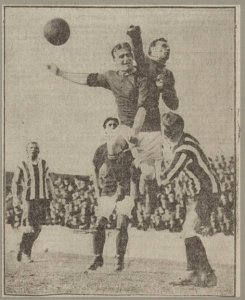 The list of all the players from the 1910/11 season with links to their articles is to be found here.   We’ll be looking at another player from the season tomorrow.