Paul Matz of the AISA Arsenal History Society has one of the most extensive and extraordinary collections of Arsenal memorabilia including of course a wide range of programmes.

And yesterday I was privileged to see what might well be the oldest Arsenal reserve programme in existence – for a match on April 10, 1911: Arsenal reserves v Peterborough.  It is certainly the oldest in Paul’s extensive collection.

The programme is just one sheet of paper and cost one penny – which is of course an old penny, written 1d.  In those days there were 240 pennies in a pound.  That would be about 47p in today’s currency – rather expensive for one sheet of paper! 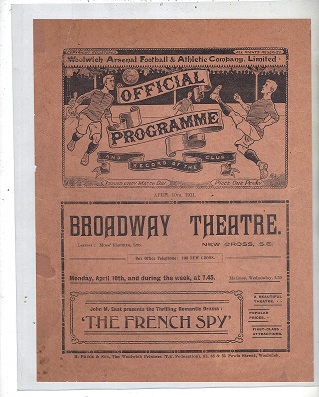 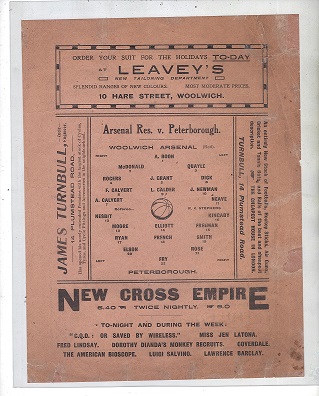 Now one of the first questions here is: what was this team that Arsenal played?   Certainly not Peterborough United as that club was not founded until 1934.   United was formed to replace Peterborough & Fletton FC, founded in 1923 – so still not early enough for our purposes.

However one Peterborough website  tells us that “The city had a football team prior to 1920 and they were called Peterborough City. They had disbanded to become Fletton United. This team played at the council owned London Road ground and at the time they were nicknamed ‘The Brickies”. There’s also reference to “The Clay Dobblers” -not surprisingly since the brickmaking industry dominated the Fletton area.”

The FCHD website that finds clubs of all shapes and sizes has in fact no less than 10 separate Peterborough clubs listed but only one of these looks like the club that played Arsenal on this day: Peterborough City who were recorded as being in the Southern League Division 2B in 1909-10.  Not a perfect fit but the best I can find. 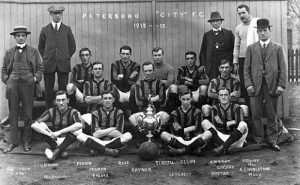 The commentary for the picture says

Peterborough City FC posing for the cameras in the 1912/13 season. The club went on to merge with Fletton United FC in 1923 to form today’s Peterborough United FC.

Obviously if you know anything more about the opposition, or indeed if you can get a scan of an earlier reserve programme I’d love to publish it.

Recent posts from the Anniversary Files

2 Replies to “Very early example of a reserve team programme”