To read about the free Arsenal video collection and about the new Arsenal Day by Day series, please see the note at the foot of this article. 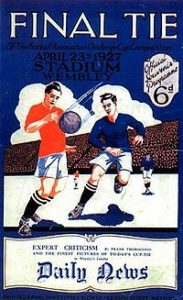 On 8 January 1927 the score was Sheffield U 2 Arsenal 3 as Arsenal started the journey to their first FA Cup final.  Prior to the arrival of Herbert Chapman, Arsenal had reached the cup semi-final twice – in 1906 and 1907, but had lost both times.

On New Years Day 1927 Arsenal had beaten Cardiff City in the League.  It was the first game for Harold Peel; Brain got a hat trick.   And this match was of particular significance since it came just one week before the third round of the FA Cup, and what Herbert Chapman did from here on is singularly interesting.

Quite clearly Arsenal had no chance of winning the league since they were currently sitting 11th in the table, but Chapman felt he did have in his squad the firm basis of a team that could in the future win trophies.   So, in effect, he created two teams: one that would play to win the FA Cup, and another that would play in the league.

As you will know, 1927 was the year of Arsenal’s first FA Cup final, and at this point the club had never won a trophy – and winning trophies was exactly what Chapman was brought to Arsenal to do.

Here’s Arsenal’s team through most of their cup run of seven games that took the club to the final, showing in brackets the number of cup games played.

That is ten players out of the 11 who played in the final, played in either all seven, or six of the FA Cup matches that season.  The final player of the cup final XI was Cope who played in five of the cup games.

One other diversion occurred before we get to Arsenal’s opening FA Cup match of the season, in the week before the 3rd round of the cup. “St Ivel” writing in the Islington Gazette reported that Tottenham were about to lose their manager of 14 years as he had been poached by Middlesbrough.

This was Peter McWilliam, an important man in Tottenham’s history who had joined the club in 1913 just when Arsenal moved to within a couple of miles of White Hart Lane.   Tottenham finished at the foot of the 1st Division table in 1915, and thus contested with Arsenal a place in the expanded first division in 1919.  Having lost the vote quite heavily, McWilliam took Tottenham through their second division season, in which he won the title, and onto the winning of the FA Cup in 1921, as well as being runners up in 1922.  However, after that Tottenham slipped back to mid-table.

It was money that enticed McWilliam north, the salary offered was stated to be £1500 a year – an extraordinary amount for a manager at the time.  That is around £87,000 today – but we have to remember football’s only source of money in the 1920s was the gate receipts.

Middlesbrough were always certain to win the 2nd division in 1927, and McWilliam joined the club as the season ended, but the following season he saw his side relegated back to the second, only to return to the first once more in 1929.

It is said in some accounts that in 1934 he became chief scout for Arsenal, having declined Arsenal’s offer to manage the club.  That seems highly unlikely to me; after Chapman’s death in January 1934, Joe Shaw took over the manager’s position, with George Allison as his mentor.  Allison’s autobiography makes it clear that he was appointed manager-in-waiting shortly after Chapman’s death, with only his contracts elsewhere prohibiting him from taking over the post at once.  Why on earth would Arsenal want a person who had failed at Middlesbrough and whose one trophy was an FA Cup with Tottenham, at a time when Arsenal had just won the league two years running, including once with the all-time record number of points?

It seems to me like another of those managerial fanciful fairy stories of the type which ex-Arsenal manager Leslie Knighton indulged in.  In the end McWilliam returned to Tottenham, by then back in the second division, leaving them on the outbreak of war, retiring in 1942.  It is said that during his time at Tottenham he devised the “push and run” style of play that in the media became known as a the “Spurs Way” of playing.   It may be better described as “pass and move”.

McWilliam’s greatest claim to fame however is that he worked with the very young Vic Buckingham who much later managed Ajax and Barcelona and has been credited with some of the evolution of “total football”.

But enough of Tottenham.  Let us now return to the start of Arsenal’s 1927 cup run, with its selected, dedicated cup team.  The run to the final began on 8 January 1927 with the game Sheffield United 2 Arsenal 3.

All the Arsenal directors were at the game except for Sir Henry Norris; thus William Hall, George Peachey, John Humble, J J Edwards and Samuel Hill-Wood all saw the match.  The Times called the result “one of the surprises of the day”.

But in the last three games prior to this match Sheffield United had lost 4-0 to Aston Villa away, beaten Aston Villa 3-1 at home and then lost 5-0 away to Manchester United.  As a result of these and other misadventures they were now 14th in the league.  Hardly a dead cert in a match against as wily a manager as Herbert Chapman.  Brain, Buchan and Hulme scored, and the only member of the FA Cup team missing was Baker who having missed all of October and November through injury had played the last two league games, but was clearly feeling the effect of being back in the thick of it.  Milne who had deputised during Baker’s absence once more played right half – but it was his only FA Cup match.

If the Times had really wanted to find a surprising result they might have picked Bournemouth’s 1-1 draw with Liverpool, or Reading of the Third Division South beating Manchester United 2-1, or even Walsall of the Third Division North losing to the London amateur team Corinthian 0-4.   The newspaper really was totally out of touch with reality.  Rather like today.

Arsenal continued with their two team approach and won the cup – their first-ever trophy, and then went on to win the League with a record number of points.  In all, through the 1930s, they won the FA Cup twice and the League five times, something all the more remarkable because they were the club’s first-ever major trophies.

You can read the whole story about the rest of the 1927 approach to the final on the AISA Arsenal History Society blog where you can also find all the Arsenal anniversaries for today and see a video of a famous Arsenal cup win.

Day by Day – An Arsenal video for (almost) every day of the year in order.

For details of the videos sorted by club, and videos in the order we published them, plus our 21 golden great videos please see here.

ARSENAL DAY BY DAY: THE STORIES

Just as the videos have been put in date order so we are now doing a day-by-day series of Arsenal events, looking to find one good story a day throughout the year.   This project started on 1 December, and we are adding to it each day.   The index is here.

The Arsenal History Society is part of the Arsenal Independent Supporters Association – a body which gives positive support to the club, and has regular meetings with directors and senior officials of the club to represent the views of its members to the club.  You can read more about AISA on its website.

Henry Norris at the Arsenal:  There is a full index to the series here.

Arsenal in the 1930s: The most comprehensive series on the decade ever

Arsenal in the 1970s: Every match and every intrigue reviewed in detail.