If you have ever wondered where Arsenal’s first game was played, when they played their one game under the name of Dial Square FC, here’s a map that shows you.

This map was created by Janne Niemikorpi.  But first a map of the area today – just click on the map to make it bigger… 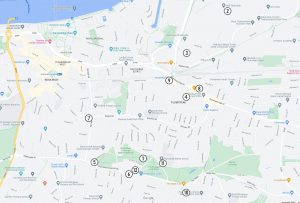 1 Plumstead Common football pitch, where the first game as Royal Arsenal was played on 8 January 1887.

4.  Invicta Ground.  Home from 1890 to 1893, and scene of the first ever FA Cup game beyond the preliminary rounds

8.  O’Dowds.  Was called the Green Man Pub at the time and was the dressing room for the Manor Ground in the 1890s.

9. Lord Derby and Plumstead Radical Club.  The Lord Derby was a fan favourite in 1893.

11.  The Old Mill pub, thought to be a source of tips from the landlord.

To see this map in larger format just click on it. 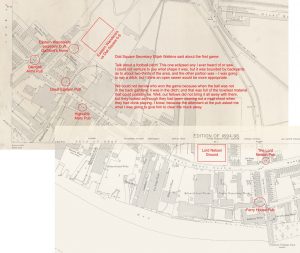