I have recently kindly been supplied with this picture of Terry, to supplement the story below. 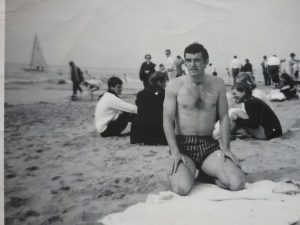 Terry Anderson is not a name that springs to mind when we speak of Arsenal.  But he it there in the annals of the club – signing professional forms for Arsenal in 1961.

He was a player for the England youth team and so obviously a young man of exceptional skill, and he played for the first time for Arsenal on March 2, 1963 against West Ham in a 4-0 win (Baker got 2, McCollough and Strong scored).  It was one of five appearances Terry made that season – scoring one goal away to Sheffield United

This was during the Billy Wright years – those years of The Darkness when we went year after year winning nothing, and not even getting to a final.

Looking at the records I did actually see Terry Anderson play, although I confess I don’t recall the game at all – I just know I was at it, since in those days I didn’t get to that many games (being a student in Brighton at the time).  But what made me think of him was a review I have just written of a game in the 1972/3 season, by which time he was playing for Norwich.  In the Norwich v Arsenal league game at Carrow Road on Sept 23 1973 he scored twice helping Norwich to a 3-2 win and putting a dent in our championship ambitions.  We came 2nd that season.

(The review will appear in a forthcoming book: Arsenal in the 70s.  The book includes a review of every first team game from 1970/1 to 1979/80.  More on the book as we approach publication date).

But back to Terry Anderson.   He was a winger, and it was an era of wingers at the club – most notably the long serving George Armstrong, and the emerging Alan Skirton, he was always a reserve player waiting for a chance.  Overall he played 26 games and scored 7 goals for Arsenal and joined Norwich City in February 1965 having made 10 appearances and scored two goals for Arsenal that season.

He had more success at Norwich and stayed there nine years, being a central part of the side that won promotion to the first division for the first time ever in 1972.  They also reached the final of the League Cup in 1973, knocking out Arsenal en route.

But after leaving Norwich, things don’t seem to have worked out so well, as Terry played for Colchester for 20 games across two spells, 36 times for Baltimore Comets in two separate spells, 10 times for Scunthorpe, and four times for Crewe – and all that in 1974-6.

Then the tragedy.  Terry was seemingly on a training run in Great Yarmouth on 24 January 1980, four years after playing his final game, and never returned.  His body was found a week later – he had drowned.

As I say, Terry Anderson is not a name that many at Arsenal will ever recall – although I expect his name at Norwich will mean a lot more.  I don’t even have any records of what happened to him during the last few years of his life, and this seems to make the story even sadder.

His picture however does appear on the Arsenal Wall, and his name is remembered as are the names of everyone who played for the club.

The history of Arsenal, manager by manager

31 Replies to “Terry Anderson or Arsenal and Norwich: a tragic story”