Arsenal hosted fellow Londonders Chelsea. Chelsea were a relatively new club having been formed in 1905. They gained admission into the Second Division of the Football League that year without having kicked a ball. They were promoted within two seasons and on 9th November 1907 the First Division saw its first London derby. The attendance was reported at somewhere between 55,000 and 65,000. Either way it was the biggest crowd that had watched a Football League game in England. Chelsea spent three seasons in the top division, always within two points of Arsenal, before being relegated in 1910 before returning again this season. Their form had been similar to Arsenal’s so there was no reason not to expect a win for the Reds.

Arsenal made one change, Winship returning at outside-left in the constantly changing forward line in place of Lewis.

Whilst Chelsea’s team was:

The weather was perfect for a game of football: no wind and bright sunshine.

From the kick-off Randall attacked but Cameron cleared with a hefty punt that immediately put Bridgeman in with a chance but Thomson pulled off a fine tackle. Arsenal then took control of the game with Common and Greenaway prominent. Winship shot wide and two quick corners resulted in missed chances. It was all Arsenal with the Chelseadefence looking very shaky. However, Common seemed to be wearing his clown shoes as he continued scoop the ball over the bar as he had done in previous games. Disaster struck after 11 minutes whenChelseafinally managed to put on an attack. The ball was put through to Bridgeman who was given time to control the ball and put in a low shot just inside the post. The game then flowed from end to end with Crawford denying Dodd whilst Common had a thunderbolt stopped by Bettridge’s face which knocked him out. From the re-start, Arsenal attacked and Common headed over a cross from Randall. Shades of The Invincibles saw a move involving all of Arsenal’s forwards come to nothing when Greenaway put in a cross that was easily cleared by Cameron. Arsenal continued to push for an equaliser but their final touch would not come off. In a rare Chelsea attack Peart and Sands combined to dispossess Douglas, and when the home defence was breached Crawford was on top form to deny the Chelsea forwards. Common missed another chance and it seemed that it was catching as the impressive Greenaway also shot wide. The final 15 minutes of the first half saw Arsenal continue to press. A shot by Randall was pushed over by Brebner, McLaughlan shot across the face of the goal, Common shot wide (are you getting the picture?) and Randall headed over. Half-time came with the visitors still leading by the only goal.

Common managed to surpass himself in the second half by completely missing the ball from a Greenaway cross, Joe Shaw had ventured forward and latched on to the loose ball but managed to shoot over. Chelsea had their obligatory breakaway but Crawford fisted Dodd’s shot over the bar. Arsenal then managed to get three shots on target, unfortunately none were particularly strong and Brebner had no trouble holding on to all three. Arsenal’s forwards seemed to run out of steam and Chelsea had a spell of attacking. However, their forwards were no better than Arsenal’s. A mis-kick by Peart allowed Dodd in but Shaw came in to rob him as he went for a shot. With ten minutes to go fog started to descend and the light was fading fast. The closing stages of the game were all Arsenal but no end product saw another defeat. At the end of the game the travelling Chelsea fans passed along Plumstead Road “indulging in every sign of jubilation!”

It seemed that the scene had been set. Arsenal’s defence playing splendidly but the forwards having trouble hitting a cow’s arse with a banjo. Alf Common, in particular, making the Woolwich fans wonder how he could have ever been the world’s most expensive footballer.

Amazingly Arsenal’s form had swung from title-winning to relegation fodder in one game. Two points from the three games would have seen them relegated the previous season. The wheels were starting to wobble.

This was the first time that Chelsea had won at Arsenal and the next time was January 1947. 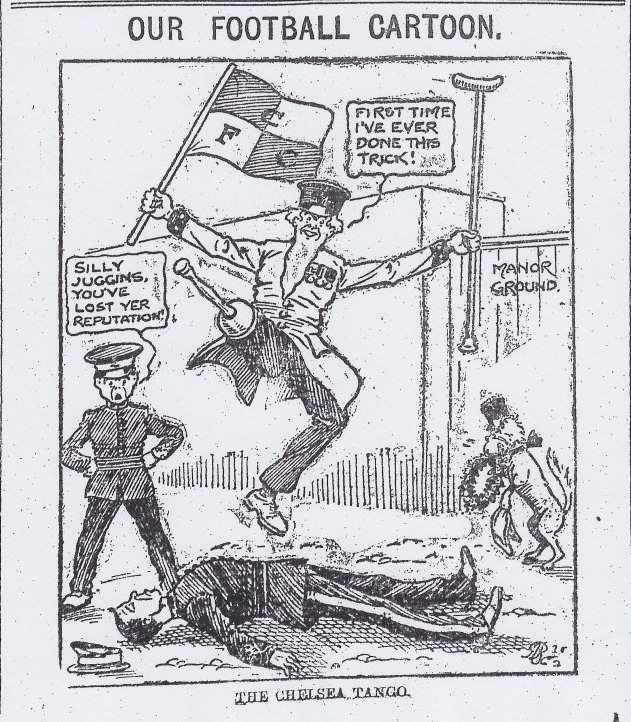 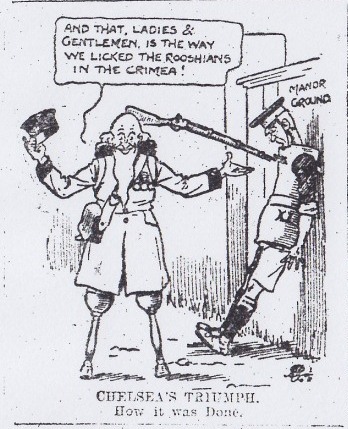 The reserves game v Clapton Orient was postponed due to fog. Chelsea’s reserves took advantage of playing two games during the week and leapfrogged over Woolwich Arsenal to the top of the South Eastern League table. Although the Blues were 2 points ahead of the Reds, Arsenal had three games in hand.

There was not much else happening this week. However, a sensational rumour puts the cat amongst the pigeons next week.