Minor amendment made to this article 29 Dec 2013

Frederick Gordon Coles, known as Fred was a centre half and right half who joined Arsenal in 1910 from Nottingham Forest

He is recorded by Dean Hayes ( l am struggling a bit here to find any other information and its all I have), as havingj previously played for Nottingham Post Office (yes, honest), Notts County, and finally Nottingham Forest, before heading south.

He appears to have been transferred in after the season had begun and made his début in the league in a 1-0 victory over Chesterfield on September 29 1900 in front of 5,500 people.  Anderson who had been playing right half until this point, moved over to left half, making way for  Coles.

Fred was obviously a player who could fit in as he also played at outside right once that season.  He played 27 league games and scored two goals in that first season and three games in the FA Cup.  In 1902/3 he played 32 games in the league out of 34 plus all three FA Cup games.

In 1902/3 he played the 17 of first 18 games, and then stopped after the 1 January game against Stockport.  He did return for the last match of the season and made one final appearance on January 16 1904, his place having been taken over by John Dick.  Fred Coles moved on to Grimsby Town in June, with Arsenal having won promotion but Fred playing almost no part in it.

Arsenal.com give us a few subsequent details saying that later he became a cricket and football coach in Gothenburg, Sweden. He was also trainer of Hague in Holland between 1910 and 1911.  He died on 22 April 1947. 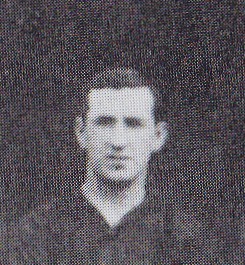