I am currently writing a book on British football managers in Portugal. There are a few Arsenal connections with two of the five mangers being ex Arsenal players, and I will be writing in detail on Arsenals 1948 tour which resulted in the famous Taca da Arsenal (Arsenal Cup).

However, at the moment I am looking at Joseph Szabo’s apparent visit to Highbury, a story which may or may not be linked to S.C. Braga adopting Arsenal’s kit.

This is one of the most contentious aspects of S.C. Braga history and it comes in two versions.

Version 1: Joseph Szabo took a trip to Highbury and was so impressed by the club he decided to change the strip. I have seen various dates for this trip.

“Way back in 1921 , Braga changed their original colours of two large green and white vertical stripes to red shirts and white shorts . Why? Because their then coach Josef Szabo was so enamoured by Arsenal during a trip to Highbury that he decided to adopt the London club”s colours”.

Untold – Arsenal.com Walter Broeckx. “But when their coach Jose Szabo visited Highbury in the 1930s he was so impressed by Arsenal that he convinced the team to change their colours into the Arsenal colours”

And I have seen various other dates stated for the trip.

Version 2: President of S.C. Braga Jose Antunes Guimaraes had business interests in London and was an Arsenal supporter. He instigated the change of shirt and physically brought some old shirts back from Highbury to Braga.

I can dispel some of the above.  S.C Braga was founded in January 1921, Joseph was a footballer with Ferencvaros until 1926 so Mick and Arsenal.com are incorrect.

Portuguese sources in the main, say the visit was 1935, one said September 1935.  My main area of interest with Joseph and Arsenal is not the change of strip itself, but if anyone can add any definite information I would be grateful. S.C Braga first wore the Arsenal shirt in 1945/46 , the second team, and in 1946/47 the first team. 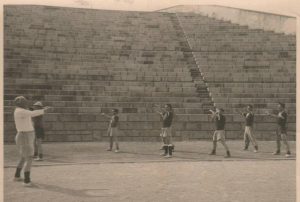 Portuguese sources put another aspect on this trip to Highbury that is the affect on Josephs coaching abilities.

“Joseph Szabo was a staunch supporter of Arsenal coach Herbert Chapman’s football theories. In 1935 he completed an internship in London to update and observe Chapman’s work directly, which determined his future version of training, tactics and discipline.”

Of course the obvious fault with this story is Herbert died in January 1934. But there are a lot of stories in Portugal which suggests to me they may have the date wrong but he did probably do some training at Highbury, and it appears to be that he stayed weeks rather than days.

I will probably never be able to prove who instigated the shirt change but it would be nice to prove that this visit occurred. Joseph Szabo went onto be a successful coach and it appears that his training at Highbury  was the catalyst of this, which I hope would be of interest to Arsenal fans as well as myself.

So if anyone can find any mention  of the visit in old newspapers/ Arsenal programmes etc please let me know.

Apart from the argument above to suggest that the visit was in the 1930s and not the 1920s, it should be remembered that throughout much of the 1920s although Arsenal were a first division team, they had not only never won either of the major trophies in England – the 1st Division and the FA Cup, they had never come closer than two FA Cup semi-finals in the early part of the century.

Indeed in the first half of the decade Arsenal were more associated with battling against relegation and early exits from the Cup, than with any form of success.  In 1924 they finished 19th, and then in 1925, 20th – both times being very close to going down to the second division.

The novel “Making the Arsenal” by Tony Attwood which describes the events of 1910, which created the modern Arsenal FC, is now available for the first time on Kindle.  Full details are here.

Also available on Kindle, “Woolwich Arsenal: the club that changed football” the only comprehensive history of the rise of Arsenal as a league club, and the attempts to destroy the club, from within and without.   For full details please see here.

Both books are also available as paperbacks.  Please see here.

One Reply to “Joseph Szabo, his visit to Arsenal, and the way it changed SC Braga’s history.”