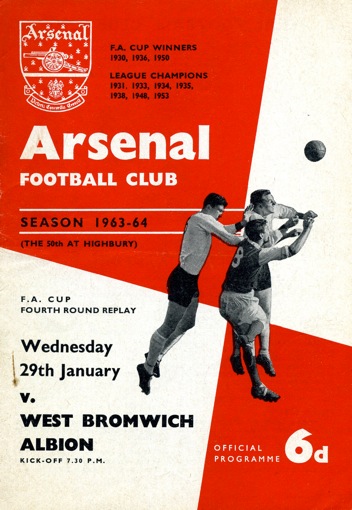 My father took me to my first game at the age of seven and I can remember it so well: a 3-1 defeat to Luton Town in March 1957.

Our goal was scored by Derek Tapscott, who drilled it in from the edge of the area, but I cried all the way home because we lost.

However, the set-back did not put me off and my dad took me regularly to all the home and local away games, but then, in 1963, Arsenal were drawn away to West Bromwich Albion in the FA Cup and I just had to go – and so told my parents the news! How things have changed over the years, as my mother actually went and bought me a train ticket and was happy to see her 14-year-old son go off to Birmingham, totally on his own. Can you imagine that happening nowadays?

I arrived at St Pancras station and was amazed that I was not alone. There were thousands of Gooners (although in those days the name didn’t exist!) and any nerves I had were soon gone.

I settled into a seat with magazines and papers and couldn’t wait for the match, but then it dawned on me. I had no idea where to get off or, more importantly, where in Birmingham West Brom actually was! After what seemed an eternity, we stopped at a station where most, but not all, Arsenal fans got off.

So I did the same and found myself walking behind a group of fans all the way to the ground. As it was not an all-ticket match you could stand anywhere you wanted, but I was worried about where I should go. But then, once inside, from the corner flag to the halfway line it was packed with Arsenal fans. And I thought I would be one of only a few there!

Although it was not a great era for Arsenal, our team tore into West Brom and we were 3-1 up at the break – I was really enjoying myself. In the second half my hero of the time, Vic Groves, got concussed, but in those days there were no subs, so he just played on. West Brom then got a second, then a third, and with their crowd going mad, Arsenal were really hanging on. I remember for the first time supporting Arsenal being totally scared that the other team were going to score the winner.

Somehow we hung on for a replay at Highbury and, as we left the ground, I was so relieved. An announcement came over that the station for Arsenal fans had changed.

I had no idea where that was and now was really worried. I asked a group of lads a few years older than me if they knew where to go and they took me under their wing and got me to the station just in time for the last train back – we had a carriage to ourselves and the trip back was wonderful. My new-found friends were so funny that I laughed all the way back to London.

My parents, who met me at the station, seemed very relieved to see me and I couldn’t wait to tell them about my big adventure, which was the start of me going to all the away games with my new gang of friends. Nowadays, though, it’s home games only for me, although my father, who has been going since 1927 and is now 90, still comes with me.

This is just one of dozens of nostalgic and evocative Arsenal fans’ stories from over the years that are featured in the excellent Arsenal Til I Die book. The #10 book is available in the Arsenal Club Shops or online now from www.tilidie.co.uk/buy.html