Picking up on the licensing strand from your AISA history web article “Arsenal’s view of its own history is starting to change” dated August 17th 2011, alcohol was indeed on sale in the ground throughout the games from the inception of the team playing at the Manor Ground from 1893 through to the end in 1913.

I re-checked the sources used for my dissertation on the crowds at Woolwich Arsenal and found a number of references to “refreshment” bars or stands which appear to have been dotted around the Manor Ground, and re-positioned or extended over the years, as refurbishments occurred in different areas of the ground.

As part of the Kentish Independent’s description of the Manor Ground on 2 September 1893 prior to the first League game against Newcastle they noted that; “…there are three refreshment stalls provided”. The Kentish Mercury additionally reported on 1 Sept 1893 that of the three bars, only “one was devoted entirely to non-intoxicating liquours”.

Interestingly, if you look at the 1893 Ordnance Map of the Ground, there are three distinct buildings aside from the dressing rooms and the North Stand. I think these must have been the original bars.

In February 1907 there was a Storage magazine explosion at the Chemical Research Buildings based on Plumstead Marches. The Kentish Independent stated on 15 Feb 1907:

“…what the explosion did wreak it’s vengeance on without stint, was the refreshment department behind Spion Kop. It is a dreadful wreck. There must have been a dreadful waste of that which you – some of you – turn to for consolation at half time, for I saw bottles, temperance and otherwise neckless and useless lying about, and beer engines put hopelessly out of gear…”

The Daily News on 12 Feb 1907 reported that the explosion was so powerful that people were woken from their sleep as far afield as Braintree.  It appears that this bar was built 3 years earlier as part of the expansion of the Spion Kop as an article in the Woolwich Gazette on 19 August 1904 noted that the architect, Archibald Leitch, was utilising the back of the Abbey Wood End slope for refreshment bars.

On 30 Sept 1913 the Woolwich Gazette reported that the whole North stand Grandstand was gutted by fire which started at the refreshment bar, at the junction with the western end of the stand. It was apparently witnessed by more people than had seen the team play for much of the previous season!

Refreshment stands were obviously open to problems because the records show that on Good Friday 1898 the Tottenham refreshment stand collapsed in a game against Woolwich Arsenal. This was at their Northumberland Park ground. The reporter goes on to say that the cause was because the bar was:

““…as full as a sardine box, and after the game had been in progress about 20 minutes, a terrific roar… caused all eyes to turn in the direction of where the refreshment bar once stood. This had disappeared and the swaying crowd alone indicated that something serious had happened”.

The worst injury was that one “unfortunate” obtained a broken leg and 2 “fellows” had broken ribs.

So it appears these bars were common at grounds and not just at Woolwich. At Arsenal the bars were leased out at least by the time they had gained promotion, and not run directly by the club owing to the reference in the Woolwich Gazette on 30 June 1905. It was reported at the AGM of 24 June 1905 that the annual income for the rent of bars, etc… was £110 5sh. It is not clear whether the rental policy was due to the licensing laws or a commercial decision by the club.

Here’s the picture of the aftermath. 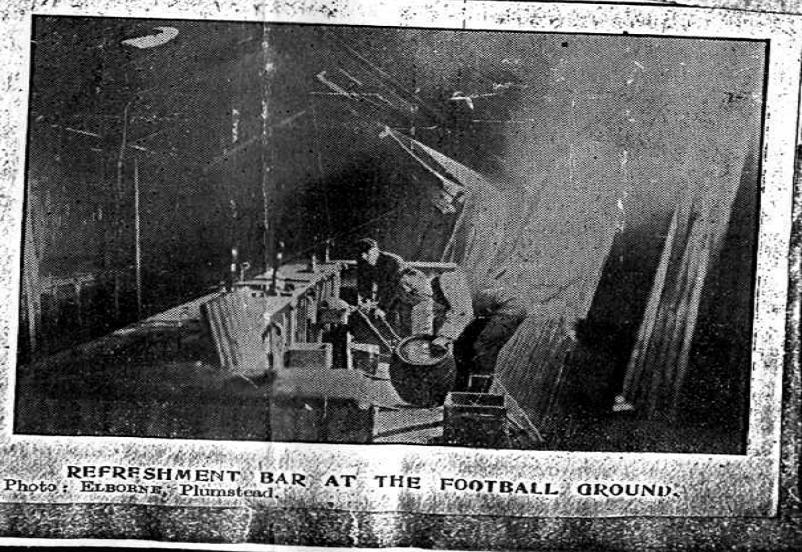 Is it time to re-think our views on Henry Norris?

The brave, fearless and intelligent: four great heroes of Arsenal

Woolwich Arsenal 2 Liverpool 2, 100 years ago: watch a film of the match!