The upcoming threat of a tube strike has led to the Boxing Day game being postponed for 24 hours. However while travelling to the rescheduled Wolves game, spare a thought for the players, officials and fans in 1904.

With Woolwich Arsenal having been promoted to the first division for the first time, these players were scheduled to play four games in five days during the Christmas period, three of them away.

They started at home against Sheffield United winning 1-0 on Christmas Eve in front of a festive 20,000 Woolwichers. The team was graciously given Christmas Day off by the league, but were back on the train to the Midlands for Boxing Day.

The game on the 26th December was against Aston Villa in front of 40,000. Unfortunately, the result was a reverse for Woolwich Arsenal as they lost 1-3. We have to assume they stayed at a hotel in Birmingham rather than go back to South London for the next day they made their way to Nottingham to play Nottingham Forest on 27th December.

Here they won 3-0 watched by a crowd of 16,000, showing that Father Christmas’ Turkey Dinner had been well and truly worked out of their systems.

From Nottingham the next day travelling took them to Sheffield for the return against Sheffield United. An unseasonally large reverse of 0-4 was seen by 30,000 on 28th December.

The team returned to Plumstead for a well earned rest, but was soon in action again three days later at home on New Years Eve. They played Newcastle and lost 0-2 in front of 30,000; which was the second largest crowd of the whole season.

These modern players don’t know what a tough schedule is!

Wishing you all a Merry Christmas and hopefully we can celebrate many Premier League points over the festive period and into the New Year. 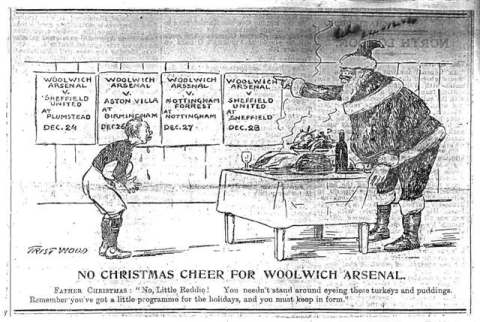 12 Replies to “Christmas Scheduling Past: when Arsenal played four games in five days”