Last year we reviewed the Woolwich Arsenal Christmas programmes from 1904 and 1905 in http://www.blog.woolwicharsenal.co.uk/2011/12/23/christmas-scheduling-past/

For this festive season we are looking at Royal Arsenal’s scheduled Christmas programmes in a snowy 1890, a beery 1891 and a fractious 1892.

Being an organised amateur club and “Champions of the South” they were in touch with Northern clubs earlier in the season, drawing up a detailed 1890 Christmas tour proposing games at Rotherham, Grimsby and Boston. The itinerary was published earlier in December as this:

Team to leave Woolwich on Wednesday 24th December, Christmas Eve at 3.45 arriving at Sheffield about 9 pm, and being put up at the Station Royal Hotel. Christmas day travel to Rotherham for a game.

Then travel after the Rotherham game on Christmas day (Thursday) to Grimsby arriving there at 9pm. Play Grimsby AKA the “powerful fishermen” on Boxing Day (Friday). Then they were scheduled to go to Boston, and stay at the Station Hotel. Playing Boston on Saturday 27th before “the players will return from Boston on Saturday or Sunday evening at their discretion”.

Unfortunately, this 1890 tour was called off due to the winter weather being so severe that they did not play a first team game between 13 December 1890 and 17 January 1891. (Royal Arsenal player Jimmy Charteris had broken his leg in two places in a scratch match played in frost and snow on 29th November 1890, and consequently never played again highlighting the awful consequences of playing during that bleak winter).

Royal Arsenal were taken to the high court of the Football Association by Rotherham who claimed £17 for Arsenal’s non attendance on Christmas Day. While Arsenal pleaded guilty to the charge, because it was pretty indisputable that they had not turned up, they disputed the costs on the grounds that it was frosty and were made to pay damages of £5 by the FA in January 1891.

The next season they were  a professional outfit and went to Sheffield United on Christmas Day 1891, presumably after being taken to the FA by Rotherham they did not wish to organise anything more expansive for financial reasons.

As can be seen the return trip was offered for hardy supporters at a fare of 17 Shillings and 3d, (17/3 as it was written) well out of the reach of the average supporter. It is an interesting point to note that the trains ran on Christmas Day in that period, and not just for a holiday timetable but for the whole day. Luckily the weather was less inclement this year and the game went ahead being a 3-3 draw in front of 2,000. Also a bonus was that Sheffield United had laid on a spread of Xmas fare. 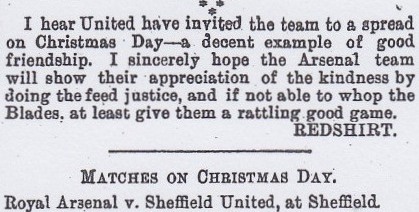 The next day they played at home against the First Lincolnshire Regiment and won the Boxing Day fixture 6-0 in front of 4,000 of Invicta’s finest supporters. As the team was virtually identical from the day before, there being only one change from the Sheffield game the players must have shown admirable restraint both at the Sheffield Christmas Party and on the train home to Plumstead. The alternative option being that the club chose a particularly weak team for the Boxing Day game knowing the players and committee were going to have a very “merry” Christmas afternoon and evening.

However in 1892 the Club’s Christmas party was much less “merry” and positively dysfunctional, as there was a huge split between the professional and amateur players, when on Christmas Eve at their evening team meal the committee sat with the amateurs, and shunned the professionals. The professionals duly got up and left en masse admist uproar at the Coffee Tavern. This incident was one of the catalysts for the Weaver clique to begin their assault on the committee which led to the club changing it’s name to Woolwich Arsenal and moving ground.

Back to the Xmas games and in 1892 they stayed at home playing Burslem Port Vale on Christmas Eve losing 1-3, going onto the disastrous party afterwards. Stockton appeared on Boxing Day with Arsenal winning 4-3, and Blackpool on 27th December in a 1-1 draw; all these games attracted between 4,000-5,000 supporters. All three of these teams were on Festive tours of the South, much like Royal Arsenal planned but were foiled in their 1890 Northern tour.