This article by Tony Attwood was updated 26 January 2017 with pictures kindly supplied by Martin Levy.

Jimmy Brain was born on 11 September 1900 in Bristol, and played for Ton Pentre having worked previously as a coal miner.

In 1923 he was sold to Arsenal.   The table below shows his league record, and reminds us that although Jimmy played mostly under Chapman he was signed by the previous manager – Leslie Knighton.

His first year at Arsenal saw him playing in the reserves – and it is worth remembering that while reserve games are these days largely ignored, they could get significant crowds in the 1920s, with often 5,000 or 10,000 turning up for a game. 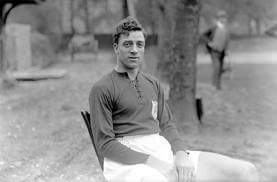 His first game in the first team was on 25 October 1924 and was a 1-0 win over Tottenham (who had also tried to sign him from Ton Petre).  Jimmy Brain scored the goal in front of 51,000 at Highbury. 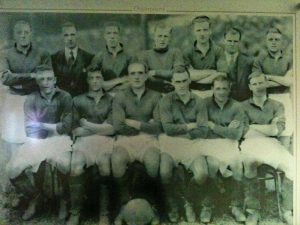 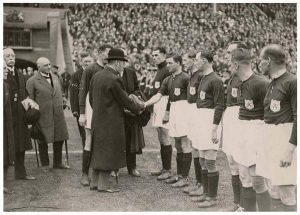 Being introduced to the King George VI at the 1927 Cup Final.

However by the 1929/30 the Chapman revolution was well under way and David Jack took over the centre forward slot, with Brain getting a few games as inside right.   The following season Lambert and Jack were the first choice players for the 8 and 9 shirts and Brain was gradually squeezed out.

However he played in Arsenal’s 2–1 victory over Sheffield Wednesday in the Charity Shield at Stamford Bridge in October 1930 and did get a league winner’s medal for the 1930/31 season.  His last appearance was on 21 March 1931. 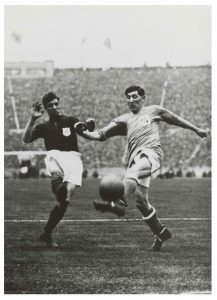 What happened after that is slightly unclear as sources vary, Dean Hayes in Arsenal the Football Facts having him transferred as a player to Kings Lynn while Wikipedia has him playing until the first world war, for Swansea Town and Bristol City (51 and 32 games respectably).

It is also interesting that Hayes has Brain signing for Cardiff City before Ton Pentre, but Wiki has him as being rejected by Cardiff.

Wiki has Brain as a manager of Kings Lynn and Cheltenham Town during the war years until 1948 when he retired from football.